The Khumbu region possesses the highest peaks and, on their slopes, the highest glaciers in the world. These peaks have been sacred for hundreds of years and the water that comes out of them is used by the people of the valley. The glaciers also allow Everest contenders to climb to the South Col using the Icefall.

But by the way, what is a glacier ? How are they formed ? Why is their study so important to Westerners ? Threatened by global warming, are they so essential to the inhabitants of Khumbu and mountaineers ?

What is a glacier ?

A glacier is a mass of ice, formed by the accumulation of layers of snow, which flows continuously under its weight. What it gains in mass in the upper parts is lost by melting in the lower parts. 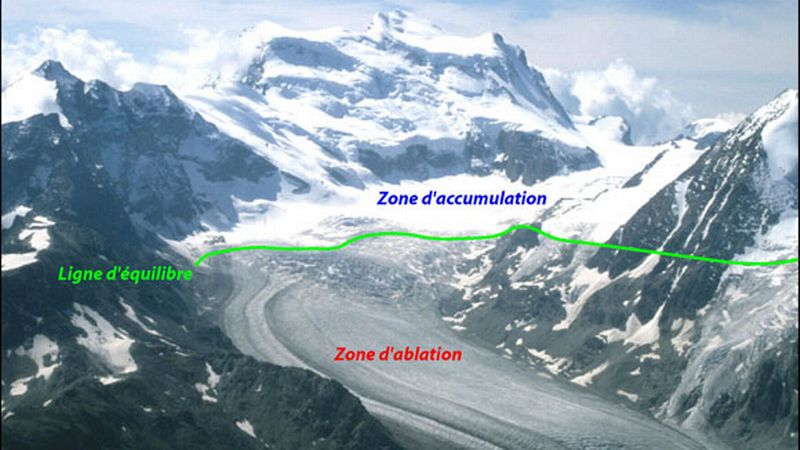 The line of equilibrium merges with the limit of the firn when this is to the highest, for example in September in the Alps

In the accumulation zone, the ice is not formed from frozen water but from compacted snow. The accumulation of layers of snow over the years allows the air that is between the snow grains to be expelled until very pure, blue ice is formed. 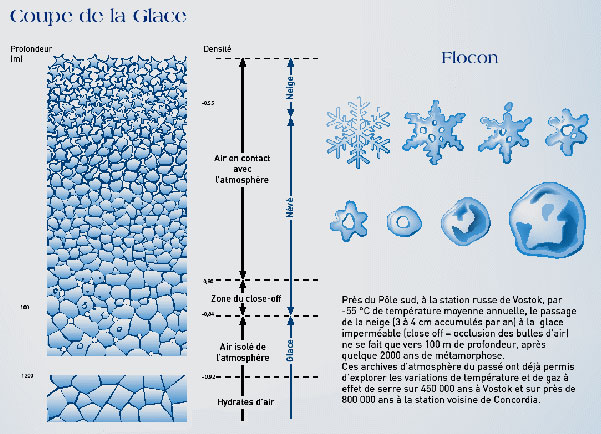 When the average annual temperature is below -10°C, the ice is too cold for the glacier to flow quickly, it remains attached to the wall : we speak of a cold glacier. When the temperature of the ice is around 0°C, it is called a temperate glacier. 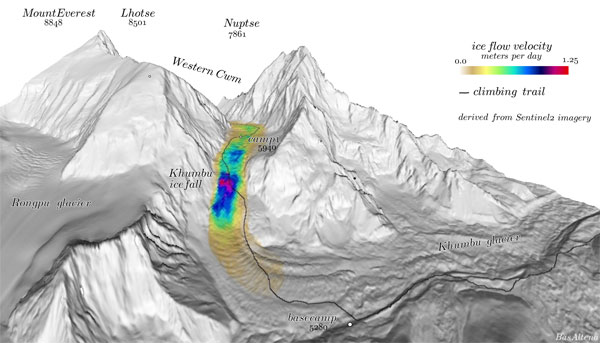 The Khumbu glacier is a polythermal glacier (most likely cold at altitude and temperate in its lower part) which flows at more than 1m per day in its steepest part : the Icefall. (Copernicus)

Within the ablation zone, the glacier can slow down to such an extent that it no longer succeeds in keeping in itself the rocks and the dust that it has torn from the bottom of the bed or that it has received from surrounding landslides. If the debris is fine, the glacier will absorb more light which can increase its melting. If the glacier has a thick layer of rock (> a few cm) this will, on the contrary, protect it and slow down the melting : we speak of a black glacier. This is the phenomenon of accelerated melting that can be observed near the base camp of Everest which is located on the Khumbu glacier : the glacier has lost more than 40m of altitude in 30 years. On the camp itself, the thickness of the debris is sufficient to slow down the melting.

Everest BC on the rock covered glacier

When the glacier melts faster than it advances, it leaves large amounts of rock carried along and forms unstable ridges on the front, the frontal moraines and on the sides, the lateral moraines. They are the witness of the last advance of the glacier at a given point and make it possible to document its past evolution. 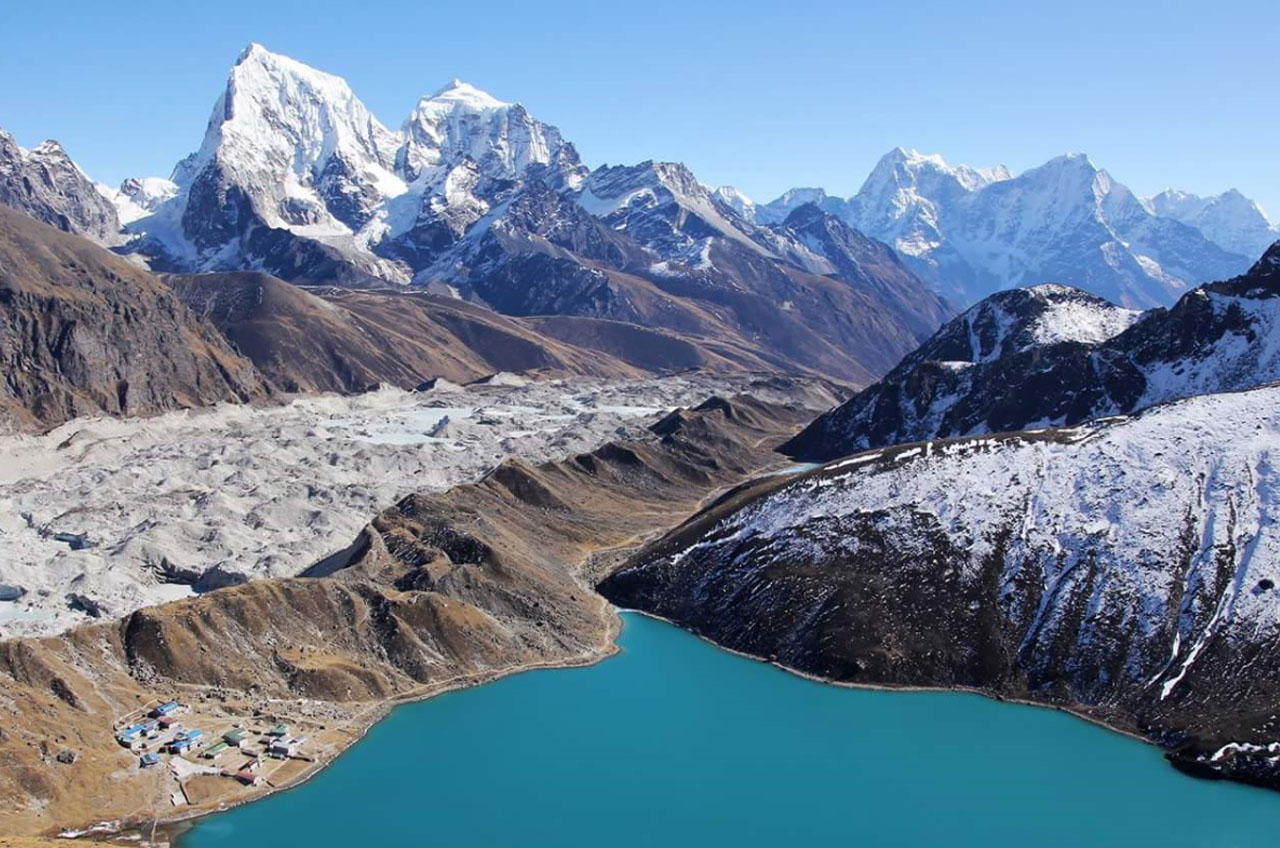 The frontal and lateral moraines can form dams which promote the formation of glacial lakes, here the high lakes of Gokyo Ri above Pangboche.

The work of Grenoble glaciologists in the Khumbu.

Each year, a team of members from the IGE and Nepalese scientists from Tribhuvan University travels to the Khumbu region in order to take readings on 3 glaciers. The goal is to obtain a database over a sufficiently long time to observe the evolution of these glaciers and link it to the climate. These observations will make it possible to validate or not the models developed by the researchers.

The study of glaciers has many objectives : they are at the same time sentinels of the climate, immense natural water towers for the inhabitants of Southeast Asia, access routes to the summits and climate archives, trapped in air bubbles. They are also threats for mountaineers (crevasses and serac falls) or for populations downstream (pockets of water, glacial lakes that give way, etc.).

Better knowledge of glaciers can improve the predictions in all these areas.

Measurements under the Mera Peak around 6400m. (IGE-Grenoble)

What is happening in the Khumbu ?

Close to the glaciers, some sectors are very sensitive, villages had to be relocated for lack of water following the disappearance of the glacier which supplied them.
On the other hand, for the populations located further downstream, the distance to the glaciers increases and the water supply is regulated by precipitation rather than by glacial melting. Indeed, the season of strong melting corresponds to the monsoon when 3/4 of the precipitation falls in the form of rain in the valleys, in the form of snow at the altitude of the glaciers.

The rest of the year, it is cold and dry in the mountains, there is little melting. However, the glacier loses a lot of mass due to another process : sublimation (direct passage from the solid state to the gaseous state). With the cold, the snow has difficulty clinging to the ground and the wind blows it away easily.

The melting of the glaciers is likely to have a significant impact over tourism in the valley. Indeed, if the faces dry out, the summits lose their splendor and gain in difficulty. The snow and the glaciers seek to fill the hollows, to soften the jumps and if they disappear this risks to complicate the ascents. This is already observable in the Icefall where the glacier receives more rockfall due to warming. Nepal’s glaciers will not disappear overnight, however.

Like most glaciers on the planet, those in the Himalayas are melting and losing speed, but this melting is not uniform : the Karakorum anomaly between Pakistan and China is a good example. (dehecq et al, Nat Geo, 2019)

Around the world, the consequences of the melting of glaciers are very different for populations downstream. On the other side of the Himalayas, on the Tibetan plateau, the weather is much drier and the water supply depends heavily on the glaciers, a significant melting could create new tensions in the region under Chinese supervision. The volumes still present are significant, but this is not the case on the other side of the planet : the major Bolivian cities (La Paz, El Alto) are growing each year while the glaciers that feed them are melting more and more rapidly.

The glaciers appear as formidable showcases for tourism on the Nepalese mountains. The Tri-haut will try to find the IGE team to observe and share their work up there, at an altitude of more than 6000m.

For more information on the glaciers, do not hesitate to go to the Ombre des glaciers alpins page and the Grenoble IGE website.