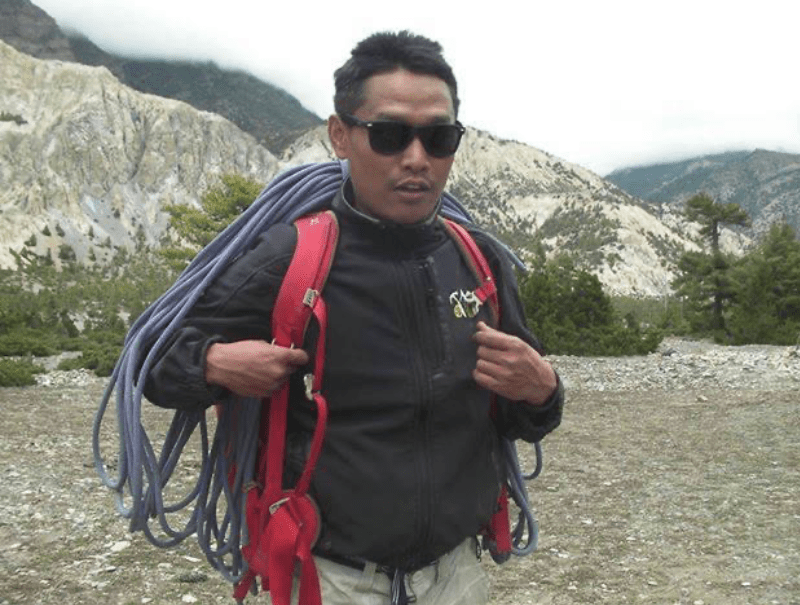 Namgyal Zangbu is a Nepalese Sherpa. His father, Zimba Sherpa is the former president of the NMA (Nepal Moutaineering Association) and was an important actor in raising awareness of waste in Nepal.

Namgyal is our main contact there. With his important knowledge of the terrain and the populations, and thanks the Khumbila foundation of which he is director, he was able to direct us to the main needs of the Khumbu.

His investment for the Nepal, as well as that of his father, has proved to be a very important asset for approaching Nepalese organizations and giving us credibility.

His previous trip to France allowed him to master the language and give his point of view on the project in French :

GREETINGS FROM THE HIMALAYAS,

I am the first generation of my family tree to be born in the city of Kathmandu. Before that, my parents and grandparents were all born in Khumjung village which is located within the Everest (Sagarmatha) National Park and located at 3790 meters above sea level.

Unlike most of my friends in Kathmandu, almost every year I had the chance to travel to Khumjung village and visit my grandparents and all my cousins. Even at an early age, returning to the village was a moment away from the dusts of the city. The fresh air, the clean environment, the flora/fauna and the magnificent mountains, were a reason to feel proud to be a Sherpa and to be part of this landscape.

Over the years, as I continue my annual visits to the mountains, the apparent degradation of the environment was quite evident.
Large-scale deforestation, the increasing number of houses and lodges being built, the amount of plastic products thrown on the paths and in the rivers, the increasing of population and the number of tourists are the apparent changes that I witnessed over the years. The negative environmental impacts were clearly due to population growth and the need to cater to the growing number of tourists visiting the region for trekking and mainly for expeditions to the highest mountains in the world.

Tourism has indeed brought a great change as it has provided job opportunities, better living standards, as well as the construction of the Khumjug School with the assistant Himalayan Trust established by Sir Edmund Hillary (the godfather of the Sherpa people). It also allowed the locals to be educated, to travel abroad and to realize the importance of preserving the environment for the future generation.

In the Everest region, we need a symbiotic solution that would keep the tourism industry intact as well as the local environment. Various measures have been taken by the local community, government and international agencies. Lately, garbage collection has become a crusade and a marketing tool for most. The government has also imposed high climbing fees and a rubbish deposit to encourage tourists to bring their rubbish to collection points. However, there is clearly a lack of recycling and there is little space for disposal in these highlands. There are also technical difficulties encountered at the collection point due to the amount of waste generated and collected.

In November 2020, when Olivier contacted me with the idea of building an incinerator in Pangboche, at 3985 meters above sea level, I had quickly contacted a few people in the area and realized that it was indeed a great idea and a location for the project. The proximity of this village to the most popular commercial mountains, easy access, a strong village community and other factors are a great positive force for such a project. In addition, the project will have a “pollution filter system, to avoid simply turning garbage pollution into air pollution and an installation of an energy transformation system if the villagers need electricity or hot water” meaning that the level of research provided by this project will certainly have a profound impact on the environment of the entire region.

I sincerely believe that this project and similar projects in the future will benefit the environment, the local population in general and, participate to the capacity to cope with the ever increasing number of tourists. This will continue to provide tourism related opportunities in a more positive light as well as in a sustainable scenario.

I must mention Jean Michel Jorda, who is a fervent lover of Nepal and its people. He is an expert in adventure activities as well as local culture with his strong connection to people and his land. He is also the first person who introduced me to waste management, recycling and a greater sense of the importance of preserving the environment for our future generation.

He is also a mentor for our Khumbila Foundation established in 2012 that mainly focus on “the mountain and its people” in Nepal.

Zimba Sherpa, Namgyal’s father has already been present in one of Jean-Michel Jorda’s documentary, “Zimba le Sherpa” in 2015.

You can find the website of their trekking agency, Khumbila, with the foundation which promote tourism by protecting the mountain environment.